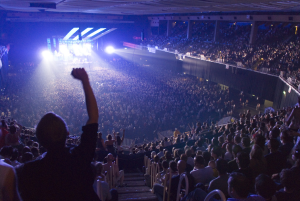 Nietzsche said that without music, life would be a mistake.

If there’s one thing introverts and extroverts can agree on liking it’s music, though I suspect they experience it in very different ways. I imagine an extreme extrovert being drawn mostly to high-energy (dance) music, and an introvert to something much more sedate and introspective. I prefer mostly the latter, though I am not opposed to high-energy music. I have my extroverted moods.

When I was in my teens I was very taken with popular music. I used to listen to the Casey Kasem Top 40 countdown every Sunday, writing down each song that made the list and recording many of them from the radio onto my portable cassette recorder (how primitive!) It was an enjoyable hobby that I engaged in religiously, and certain songs really spoke to me and created a soundtrack for my youth. When I hear one of them today, I experience an instant flashback to old feeling states I haven’t had in many years, often accompanied by a brief thrill of hope or, occasionally, despair. It’s a time machine to the ways I used to feel, whether good or bad, all sparked by familiar sound. Perhaps this is why so many of us listen to music from our youth as we get older, shunning newer material. I couldn’t tell you who tops the charts today, and I suspect we all end up thinking that the music from our teens and twenties was the best.

As I got a little older music continued to move me deeply, especially as I fell in and out of love (or infatuation) and experienced heartbreak and loneliness. Here’s where my fondness for Neil Diamond’s introspective songwriting began, as well as my love of Tchaikovsky’s emotionally-charged compositions. I began attending rock concerts in the early ’80s, drawn to their larger-than-life excitement and visual spectacle. This strikes me as odd, as it doesn’t seem like something that would appeal to a typical introvert. Admittedly, I did feel awkward when people would stand and clap or dance to the music, as music is something I experience much more internally. Inside I may be clapping and dancing, but certainly not outside. Regardless, I kept going back and ended up seeing Neil Diamond about 12 times, along with more rock-oriented acts like The Police, Journey, Styx, and Bryan Adams. Yet the songs I liked best were always the ballads, the slow material with meaningful lyrics – Faithfully, Babe, Heaven – and not the stuff that got you out of your chair (or had you standing on it, which I did once and fell off).

I’ve often wished I was musically inclined, as being a songwriter seems like a fantastic and rewarding occupation (assuming you were any good). But I know words better than music, so lyricist is the closest I could ever hope to come.