I’ve spent half a lifetime accumulating books (anyone who’s helped me move will attest to this). I’ve been fascinated by them since high school, even though I didn’t particularly like being forced to read things that didn’t engage my interests at the time (does Beowulf engage anyone’s interests?). I recall being assigned Return of the Native, Pride and Prejudice, Tess of the d’Urbervilles and the like, none of which I’ve read to this day (thank God for Cliff Notes, the Wikipedia of the seventies). I did like Shakespeare, however, mostly the poetic Elizabethan sentences, and also Homer’s great adventure The Odyssey,  but it was still torture to get me through a whole book. Forcing someone to do something isn’t a good way to win an adherent, but I also had the added struggle of trying to focus my daydream-prone attention (oddly enough I was an honors student, so my focusing must have been selective). In today’s multi-tasking world, where myriad demands needle our frazzled attention spans, focusing is even more of a challenge. Nevertheless, I am more successful with my reading regimen today than I have ever been. Let me explain how this miracle happened.

The first book I remember reading to completion – I have a great habit of starting, but not finishing, books – is Stephen King’s The Stand, which I read during one of my high school summers. Without being forced. A paperback, no less (how quaint!) It was hardly a piece of literature, but I loved it and I felt good about finishing it (it’s a long book). It was a page turner, and King is, of course, an excellent writer.

Soon after graduating, I started collecting fine leather volumes from Easton Press. First I subscribed to their “Library of the Presidents” (a biography on each chief executive), and then to the “100 Greatest Books Ever Written.” They were beautiful books, and looked quite impressive in my oak bookcases with their gold-stamped, raised-hub spines and leathery smell. They also made me look quite erudite to visitors, even though I had hardly read any of them. Who has that kind of time? (the typical American supposedly reads five books a year. Yeah, I find that hard to believe, too. The typical American lies).  I was running my own business at the time and worked sixty-hour weeks, plus I’m a terribly slow reader. The writer in me mulls passages over in my mind and ruminates on them, marveling at their poetic structure or philosophical brilliance, which doesn’t lead to the page being turned very quickly. I daydream, I get sleepy, and before you know it, it’s lights out. So my beautiful books mostly sat and collected dust, moving with me from place to place (to place) while I promised to get to them, someday (retirement? The Old Folks’ Home?) After ten years or more of collecting, I had a good 200 volumes.

My “100 Greatest Books Ever Written” bookcase

Fast forward a decade, when I decided to complete a degree in English Literature, finally and formally pursuing my interest in all things literary at the ripe age of fifty. Surprisingly, even in this course of study I didn’t have to read many complete novels. It takes much too long, and the curriculum would rather expose you to a wide variety of writers and has only a finite amount of time in which to do so. So while I did read Madame Bovary, Othello, To Kill a Mockingbird, and shorter writings of numerous and varied authors, I was still largely ignorant of many of the classics. This bothered me. How could I claim to be an English Lit major when I hadn’t even read Moby Dick to completion?

Electronic books were becoming increasingly popular at this time, and I started amassing them. They may not impress anyone on a bookshelf, but I could store thousands of these babies on one little device! If I wasn’t overwhelmed before, I sure was then. It was a hoarder’s – I mean collector’s – dream! I could start-and-not-finish books to my heart’s content! I bought each successive incarnation of Amazon’s Kindle e-reader, which kept improving, and when they released one with a back-light I began reading in bed at night. This became a ritual, with the side benefit of making me tired and directing my thoughts just before sleep. I’d developed a new habit, one that I stuck with. Reading in bed became something I looked forward to at the end of the day, a luxury I had never really indulged in before (it was something about the lights being on, I’m sure. My dog would give me dirty looks).

Thanks to the e-reader’s versatility I can read several books at once, but I limit myself to just one chapter from each (lots of the classics have deliciously short, distinct chapters, because they were originally published in serial form). This method keeps my interest alive if one book is getting dull, and even if it is, it helps to know that I’m only committed to one chapter. It gets me through the rough spots. Occasionally, I’ll like a book so much that I’ll violate my rule and read two chapters (yeah, I can be a little wild at times), but if I get too hung up on one book and neglect the others, I end up forgetting their plots and characters (who is Starbuck again?). I’m actually in this predicament right now. I’m currently reading (or re-reading – and you know you love an author’s writing when you want to read their book again, even though you already know what happens) The Count of Monte Cristo, David Copperfield, Jane Eyre, War and Peace, Frankenstein, Don Quixote, The Hunchback of Notre Dame, The Picture of Dorian Gray, King Lear, and biographies on Washington, Lincoln and Nixon (I guess I’ll be forgiven if I confuse Nixon and King Lear). Please, don’t mention another classic to me or I’ll start reading it, too. I need an intervention! It doesn’t help that many of these books are in the public domain and are therefore free to download – a major advantage over printed tomes. 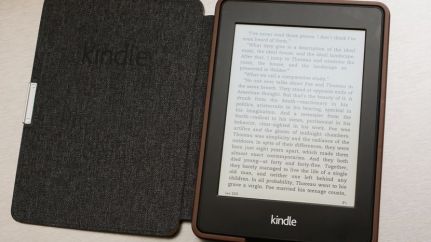 I know there’s still a lively debate over physical books versus electronic ones. As much as I salivate over a finely designed and crafted physical book, I have to admit that the electronic ones are much more convenient. For one thing, the next time I move, my helpers will be bowing down to the Kindle gods in gratitude. But aside from this physical practicality, you can’t beat the ability to store hundreds of books in the space of one, to switch among them at will, to read conveniently with the lights off, to hold the device effortlessly with one hand, to look up unfamiliar words with one click, to highlight favorite passages at length and collect them in one spot, to share passages on social media without leaving the page, to pull up the first mention of a character whom you’ve forgotten, and to have the device keep track of where you left off and pick right up from there, even if it’s on another device (your phone, your tablet). In fact, because of this marvelous invention I’ve started selling all my fine leather volumes. As nice as they are to look at and behold, they are just tying up money and space, two things that tend to dwindle as you get older. I do keep the ones I’m fondest of*, and you still can’t beat a physical book if there are lots of pictures inside. I also own an 1850 illustrated copy of my favorite book, David Copperfield, the year it was first published. It’s a bit musty and yellowed, but knowing it was printed shortly after Dickens wrote it rather fascinates me.

So even though I’ve overwhelmed myself with reading material, I am confident that, by the end of the year, I’ll have finished more (electronic) books than I ever have before – just as I promised their leather-bound cousins. I’ll probably even surpass the national average of five, which will make up for someone else who’s slacking. Or lying.

* You can read my thoughts on some of my favorite novels and passages here.