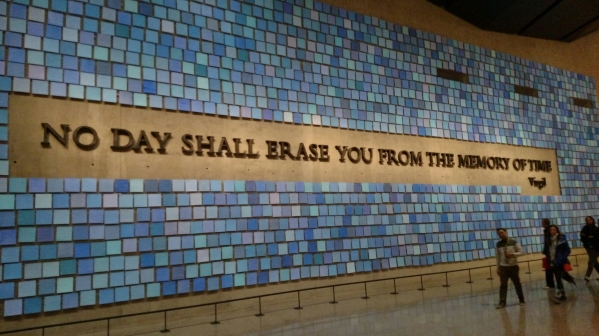 Well, I’m up to 750 photographs taken in five days. There is so much unbelievable eye candy in New York, and I’ll bet the people who live here don’t even see it. It’s been great being able to share these pictures and experiences instantly with people back home. It’s like having travel companions, and makes up for the fact that I don’t. Everyone’s comments have been great – thank you for following along as armchair travelers. 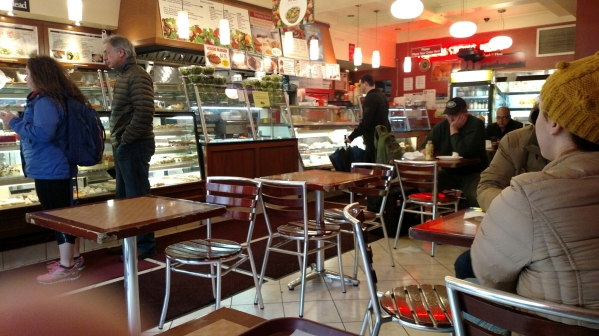 I started my day as usual, having breakfast at the bagel shop around the corner. I’m starting to become a regular there. Then, since it was raining – again – I decided to make it a museum day and visited the Museum of Modern Art. This museum is spread out over six floors. I wasn’t very interested in the bottom four floors, and was starting to wonder if I’d wasted my money. Plus, the place was incredibly crowded. It reminded me of being in a supermarket the day before Thanksgiving, but I had no carriage to ram anyone with. It was hard to walk through the exhibits, and even harder to find a place to sit and rest (museum browsing can be exhausting). Then I discovered that they keep the good stuff on the top floors. 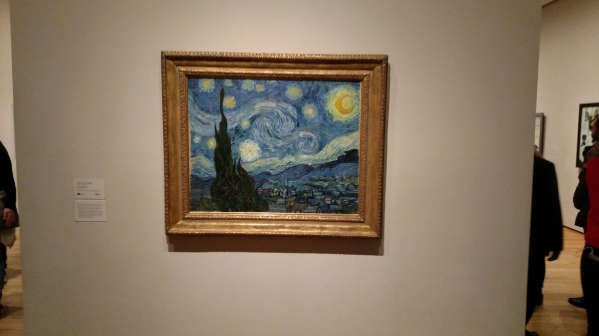 The upper floors had some prize pieces, like Van Gogh’s Starry Night and famous works by Degas, Cezanne and Matisse, among others. Even a relative art neophyte like myself knew and appreciated these works. I tend to be drawn to the especially colorful pieces. That probably gives me the art acumen of a two year old, but hey, I know what I like. And there were a few works that convinced me that just about anything can be called art, and anyone an artist. And that’s okay. 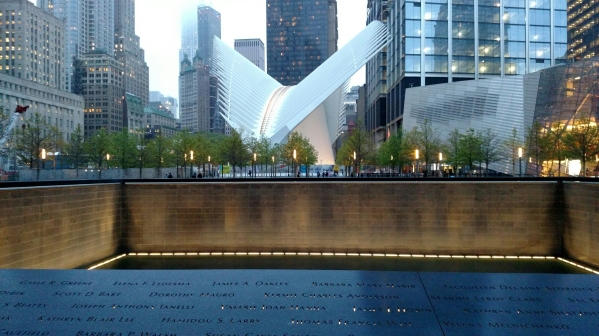 Next, I headed way downtown to the National September 11th Museum and Memorial. Wow. What a place. I’ve never been one to get overly sentimental about September 11th, but the symbolism and detailed chronicle of that fateful day here is astounding. I don’t think I could have been more impressed. It was informative. It was poignant. It was tasteful. It was dignified. That there was so much controversy surrounding it kind of surprises me, because the end result is absolutely fantastic. 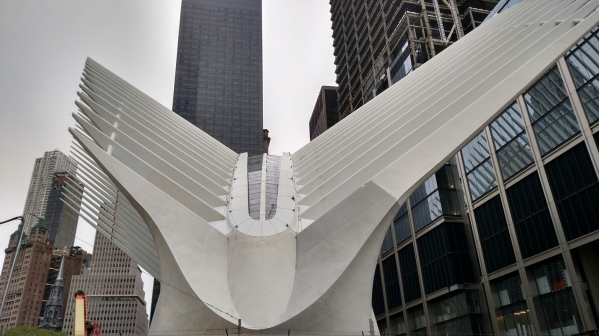 Above ground, as you approach the site, there is a massive white sculpture that resembles wings, perhaps those of a dove. It is elegant and striking (it, too, was controversial). As you walk further into the site, there is a sizable plaza populated with newly planted trees that surround the memorial pools. 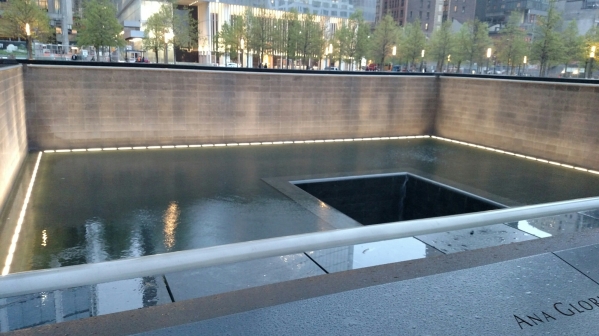 The pools – there are two of them – occupy the exact footprints of the Twin Towers, each an acre in size. Water cascades downward from all sides into a central abyss. Surrounding the pools, the names of every person who died in the tragedy are carved in metal and backlit from underneath. Many of these names have flags, flowers and other mementos left by loved ones in remembrance. 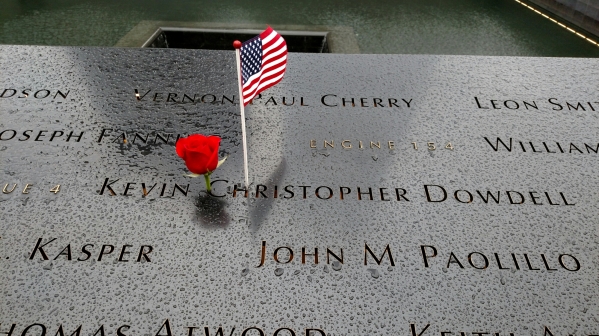 The museum itself is completely underground and goes down several stories, essentially occupying the same space that the Trade Center’s underground sections did. The space is cavernous. You can listen to an audio tour on your smartphone explaining each exhibit. Many of the exhibits are educational in nature, detailing the events of that day (many today are too young to remember) in the words of the people who experienced it – the rescue workers, the eyewitnesses, the news anchors, and some of the victims themselves via final phone calls made from the plane. There are also many relics from the tragedy – pieces of the building, pieces of rescue equipment, even one of the staircases that proved to be a lifesaver and allowed many people to escape to safety. 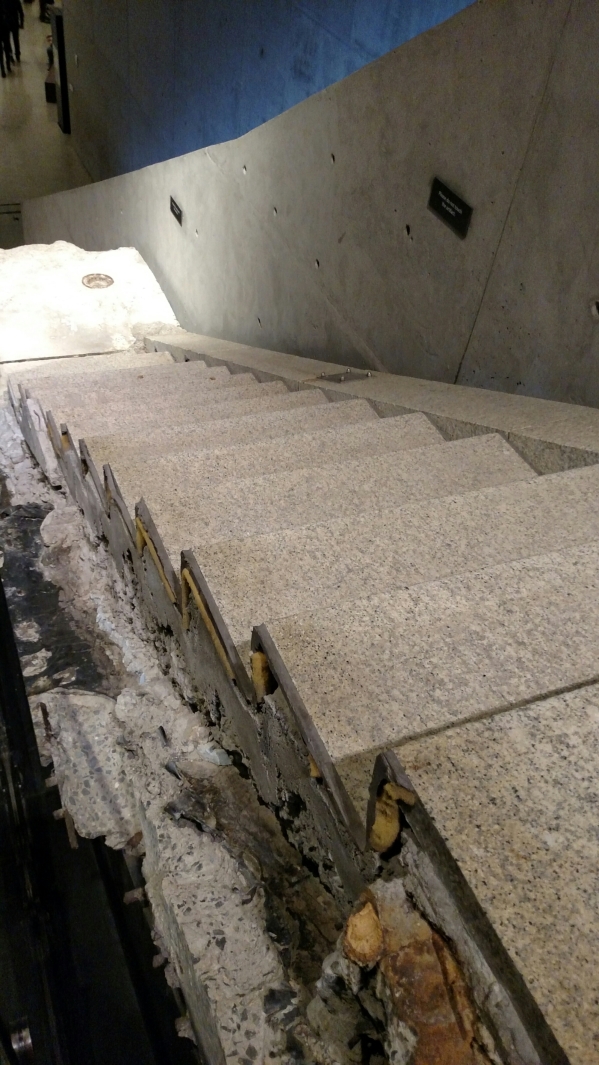 One of the most moving parts of the museum for me was a large art installation called Trying to Remember the Color of the Sky on that September Morning. It consists of almost 3,000 panels – one for each victim – in a different shade of blue. Spanning these panels is a quote from Virgil, the letters of which were made of steel from the wreckage: “No day can erase you from the memory of time.” Behind this wall are the remains of many victims that could not be recovered. 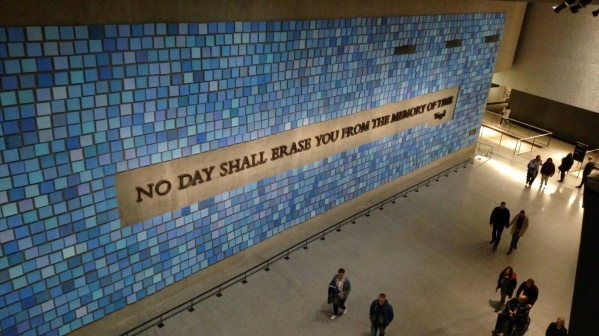 In an equally moving exhibit is an 8 x 10 color photograph of every single victim, arranged in neat rows and columns, covering four massive walls. Deeper within this area is yet another, darkened room with a glass floor and benches along all four walls. Projected on the walls, one at a time, is the name of each victim, which is also read aloud. A little bit of their life story follows, as well as their picture and audio remembrances from loved ones. Together, these two exhibits put a very personal face on this unspeakable tragedy. Out of respect, photographs were not allowed in this area. 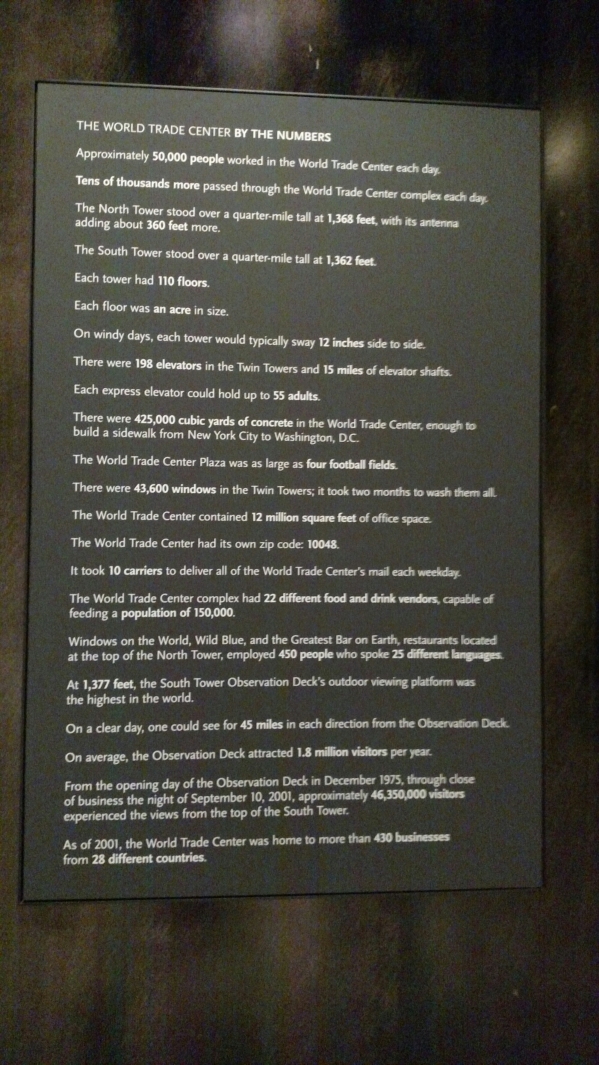 There was much to absorb at the Museum, and it would really take the entire day to examine every exhibit ( I spent three hours there, and by the end of that was a bit overwhelmed). In some sense the museum is also a library, containing far more information than can be absorbed in one visit. It was a moving experience, and I would recommend it to anyone visiting New York. 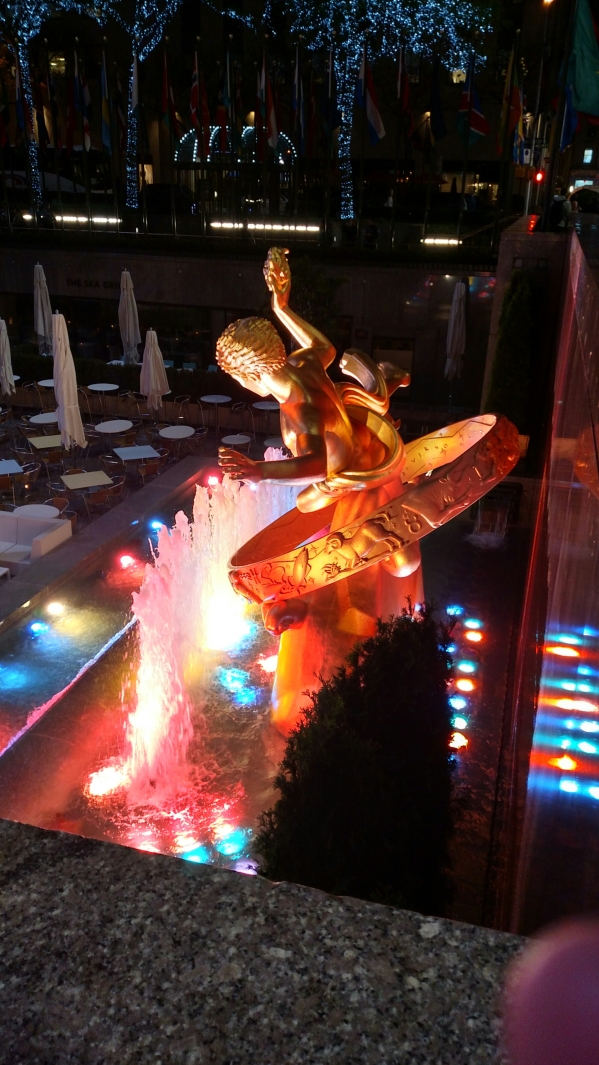 After my visit to the museum I headed back uptown, hoping to go to the top of Rockefeller Center and take in the breathtaking nighttime view of New York City. Unfortunately, it was very overcast tonight and the view from that height was non-existent. As this was my last night in New York, this is one of the few things on my bucket list that I was not able to accomplish on this trip. So instead, I absorbed the nighttime ambience of Rockefeller Center and headed back to my hotel room for my last night in the city. Tomorrow I may visit Brooklyn, and I will follow my wrap-up report on the train ride back home. 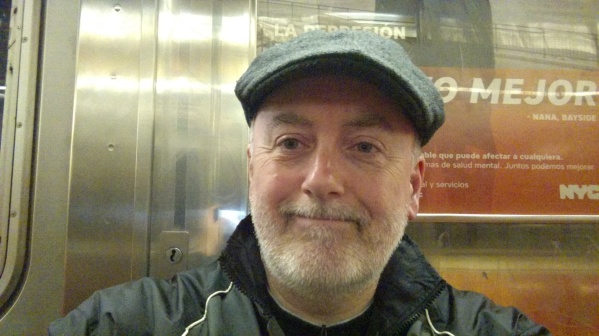 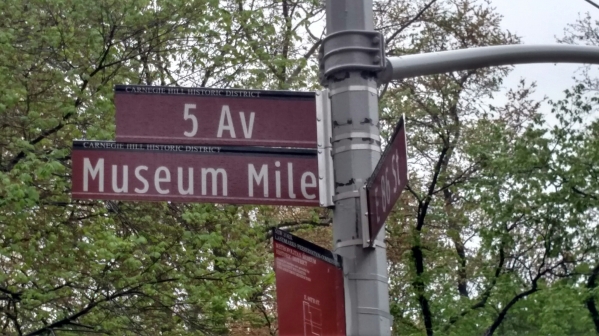 Today was a museum day, partly because it rained, and partly because I’m very tired of walking the streets already (I overdid it yesterday). The problem with this plan was that I ended up doing a ton of walking anyway, and in the rain. Twice now I have tried to cut through Central Park to get to the Metropolitan Museum of Art, which is about the only direct way to get there from my hotel. It looks simple enough on a map. But both times I ended up going in a loop (the park is huge and meandering) rather than a straight line and coming out pretty much where I started after a good 40 minute walk, and mind you every step of that walk was somewhat painful. I finally found the museum after a walk that was twice as long as it should have been, so I was a little cranky and wet and tired by the time I got there. 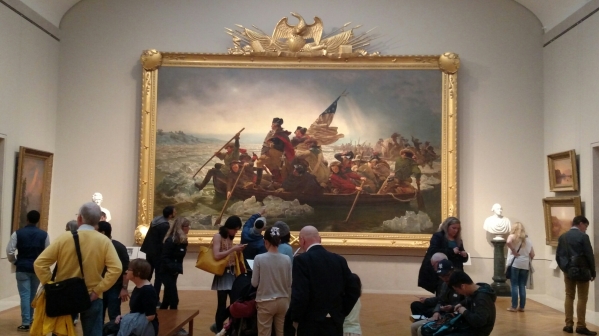 The museum is, of course, magnificent. It’s cavernous. It’s overwhelming. There are so many rooms that I suspect I only saw about half of them in the five hours I was there, and many of those I raced through because I was mindful of the time. The museum did remind me a bit of being in Macy’s in that once I was inside, I couldn’t figure out how to get out. Someone could have offered me $500 to find them an exit and I don’t think I could have done it. 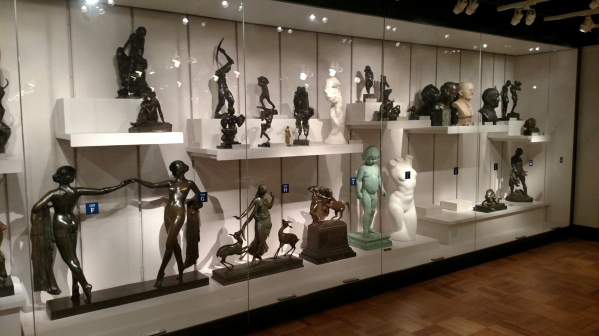 The other thing I couldn’t find was a scrap of anything to eat or a restroom (actually, this has been a problem in general the whole time I’ve been here). In this sense the museum is not very patron-friendly. But that was all made up for by the stunning artworks the museum possesses, over a hundred and twenty of which I took pictures of (see my Facebook page for today). Yeah, I was that guy. But I had tons of company, and at least I wasn’t stupid enough to use flash. I might be from Eastern Connecticut, but I know a few things about being in museums (I probably used flash last time and got yelled at). 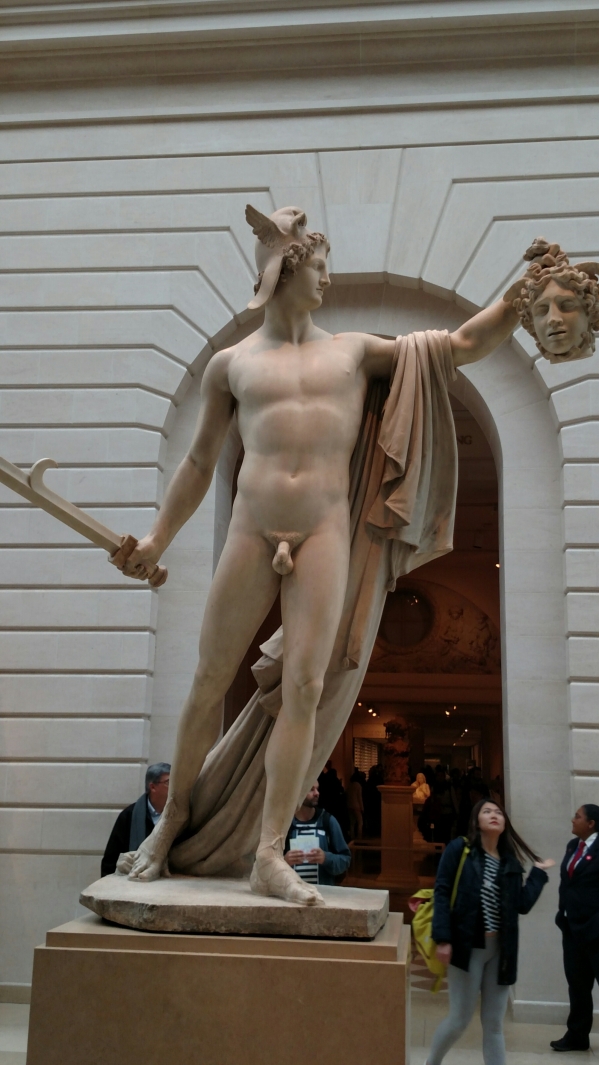 By the time my museum gawking was winding down I was extremely tired and extremely hungry. I did manage to find something to eat about three-quarters of the way through my visit. It was a $7 peanut butter and jelly sandwich that was the worst one I have ever eaten. I don’t know how you can ruin a peanut butter and jelly sandwich, but they managed, and my $3.50 cup of coffee was so hot as to be undrinkable and un-holdable. Plus there was nowhere to sit. So imagine my delight when I noticed a comment card on one of the tables. I asked them if they hated their customers. When I left the museum I found a hot dog vendor on the street, and to my groaning stomach it was filet mignon. It hit the spot, and was enough to fuel my walk back to the hotel – which I didn’t screw up this time. 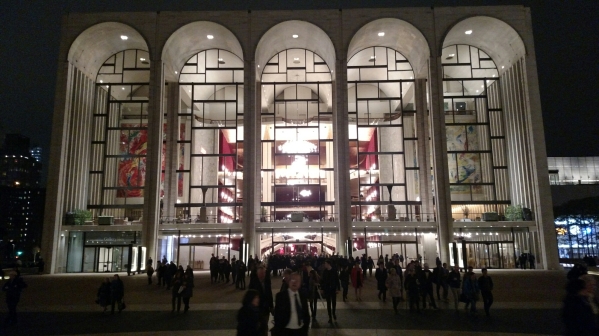 I had a whole hour to rest and shower before heading out to my second opera of the week. Luckily, I can leave my hotel and be at Lincoln Center in less than ten minutes. The opera house is gorgeous and elegant. Everything is decked out in red velvet, including the walls and the railings, accented by rosewood and stunning chandeliers that rise out of the way when the show begins. I think the house seats somewhere around 3,000 people, making it the largest opera house in the world. 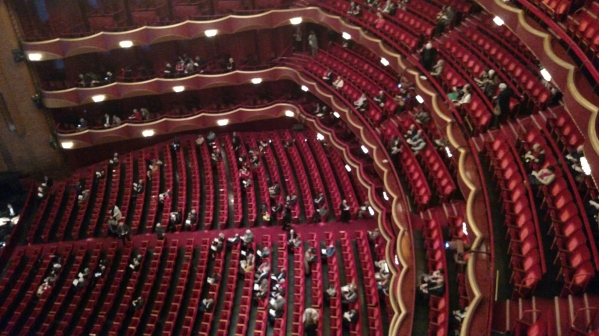 This opera was a bit special in that it’s one of my favorites, and in that it was being conducted by James Levine, the aging, beloved, and soon-to-be retired musical director of the opera house for the past four decades. It was a treat to see him there. He is now in a wheelchair and hasn’t conducted many shows lately, but this is also one of his favorites. He received a warm and  thunderous ovation, not once but four times during the evening. They built a special ramp and conductor’s podium for him to accommodate his wheelchair. The audience loves him and so does the orchestra, so they go out of their way to take care of him. 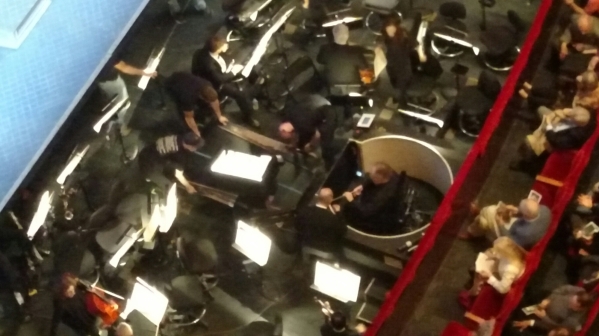 The opera itself is not one of Mozart’s most popular, but I think the music is fantastic. It’s not a serious opera. There are a lot of lighter moments mixed in with gorgeous and uplifting tunes (one of them, the rousing “All hail the mighty Pasha Selim,” is my cell phone ringtone, below).

The story concerns two refined British women who find themselves in a Turkish harem after their ship is seized by Pirates. Their beloveds were also taken and separated from them. The rest of the story concerns the effort of the men to rescue the women, even though the women have been given to the Turks as concubines. The opera was featured prominently in the movie Amadeus, which is where I first encountered it. The music struck me even back then when I wasn’t into opera at all. It was a magnificent show. The costumes were gorgeous.

Tomorrow I visit the Statue of Liberty and Ellis Island. While I’ve seen the statue before, Ellis Island will be a new experience, and I suspect a moving one.  I may also try to squeeze in the 9/11 Memorial if there’s time, which of course will be more moving still. I’ll report back tomorrow night after what will probably be an emotional day.